The Ogun State Police Command  said it was battle ready  to crush the criminal gang known as “one million boys”, who were alleged to have written a notice of attack on residents of Abeokuta, the State Capital.

Penpushing reports that,the Command Public Relations Officer Abimbola Oyeyemi made the declaration in a statement on Friday  in reaction to the purported letter, said to be causing panic for the residents.

“Attention of Ogun state police command has been drawn to a letter purportedly written by a faceless group who called itself  “one million boys” to the good people of Ogun State informing them of their intention to storm the state to carry out criminal activities”, the letter reads 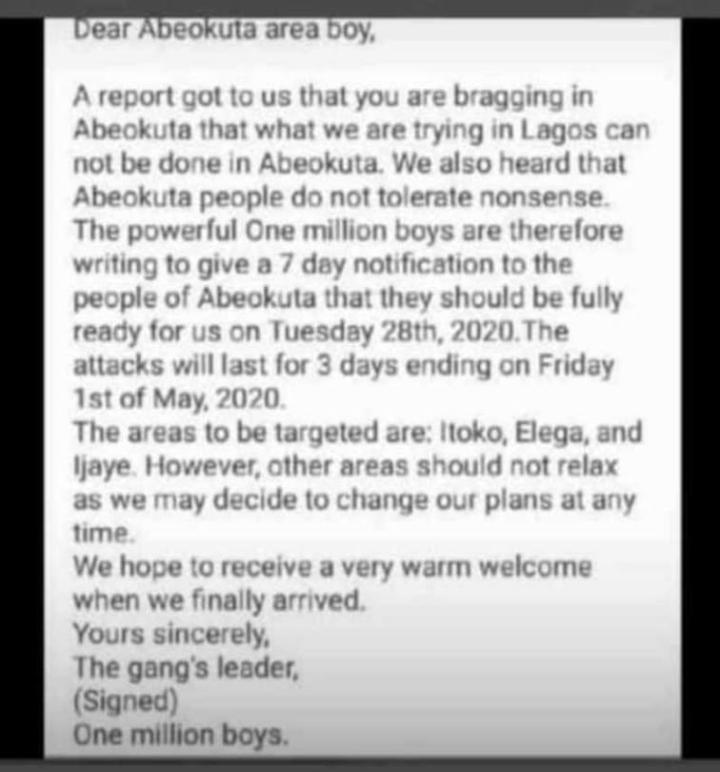 “The command wouldn’t have dignified the said letter with a response, but for the purpose of allaying the fear of good people of the state, the response becomes necessary”, Oyeyemi said

Penpushing further reports that,he added that, the Command is not perturbed by the mischievious letter, “because we have what it takes to deal decisively with any criminal gang who may want to inflitrate the state under any guise or nomenclature.

The Command spokesman  said since the commencement of the lockdown ordered by the Federal Government, the  Command is not oblivious of the fact that some hoodlums may want to take advantage of the situation to perpetrate one crime or the other.

Penpushing also reports that, Oyeyemi explained that this, informed the decision of the Commissioner of Police  Kenneth Ebrimson to activate all the Command’s tactical squads such as Special Anto Robbery Squad(SARS), anti kidnapping unit, anti cultists unit, Police Mobile Force(PMF) as well as other conventional policemen and put them on red alert with  the mandate to deal ruthlessly with anyone or group that may want to make life difficult for law abiding citizens of the state.

“The Command  therefore wishes to assure the good people of the Gateway State not to panick or be unnecessarily  apprehensive as the Command will not allow any hoodlums to fester or hibernate in the state”,he said.

“The command also wishes  to warn those who are in the habit of sending fake news capable of causing fear in the minds of  the people to desist from such devilish act as the command will be tracing the source of such fake news with a view to dealing with the author in accordance with the existing law of the land”.

The commissioner of police warned those in the habit of taking laws into their hands by embarking on jungle justice to deal with suspected criminals,to desist, adding that  anybody caught in such act will be seriously dealt with.

“A case study at hand  is that of  four innocent young men that were mistaken for armed robbers who were arrested, beaten and tied both hands and leg by members of the public at Oke Ata area of Abeokuta on Thursday 23rd of April 2020. Save for the quick intervention of policemen attached to the state task force, the four young men  would have been beaten to death”,he said.

Meanwhile, Commissioner of Police has ordered a full scale investigation into the circumstances surrounding the inhuman treatment  meted on  these young men with a view to bringing  those involved to justice.