Oluwakemi Ogunade was born thirty years ago and delivered at birth hale and health, with all features of her body, as a baby confirmed fit by medical personnel, and at 7 months she started walking without no hindrance.

Penpushing reports, as fate would have it, when she was 3 years old, she fell sick, running temperature, hence, her parents took her to a private hospital in Ijebu-Ode for treatment, a development which almost turn her future into a nightmare.

The negligence of the medical personnel at the hospital, resulted in the damage of one of her legs, following misapplication of injection given, and subsequently paralysed her left leg, and had to be taken to Olabisi Onabajo University Teaching Hospital, Sagamu for possible remedy which failed 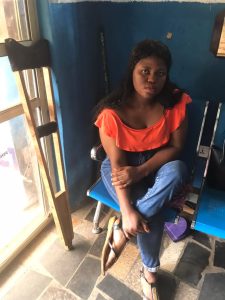 Penpushing further reports that, this was how the journey of the innocent baby started into the world of physically challenged people, but the parents ensured that, this ugly development did not cause a set back for her future, they did everything humanly possible to take good care of her

The lady in an exclusive interview with Penpushig media narrated her ordeal, recalling that, it all started when she clocked 3, adding that, when she grew up, her mother told her, what went wrong, which led to  the damage of her legs.

‘My mother told me that, I started walking when I was 7 months, and that when I clocked 3, I fell ill, running temperature and had to be taken to a private hospital in Ijebu-Ode, where I was administered with injection’

Penpushing also reports that, in her narration, she said her mother started noticing that few days after the injection, her two legs, were not functional, and thereafter took her to Olabisi Onabanjo University Teaching Hospital, Sagamu for further treatment

The Ijebu North local government of Ogun State born lady, added that, at the Olabisi Onabanjo University Teaching Hospital, the medical team, did their best, and was able to restore life back to the right leg, while the left leg totally became paralysed 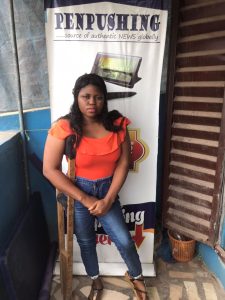 ‘My mother told me that, few days after I was injected, she started noticing that, my legs were not functional as it used to be before, and I was taken to Olabisi Onabanjo University Teaching Hospital, Sagamu for possible remedy’, she recalled

‘The medical team at the Olabisi Onabanjo University Teaching Hospital, did their best, and able to restore life back to the right leg, while the left leg was confirmed damaged due to misapplication of injection’, she added

Penpushing reports, her parents had to resign to fate, but the development did not deter them from making life meaningful for her, ensuring adequate care, and gave her good education from primary level to tertiary.

The physically challenged girl lost her father in 2007, but life has to continue, with the mother becoming breadwinner, and strive hard in ensuring that, her spirit wasn’t down, after her secondary education, she got admission to Moshood Abiola Polytechnic (MAPOLY), Abeokuta where she obtained Higher National Diploma (HND), in Marketing.

Penpushing further reports that, her urge and love for academic excellence also led her to obtain a degree, and got enrolled at the University of Ibadan, came out in flying colour, and bagged degree in Bsc Economics

The physically challenged lady, who is also determined for a better future, met her husband in 2018, and after almost a year of relationship, she got married to her loving and caring husband in 2019, a marriage which has produced two children for the couple

Penpushing also reports the resident of Apata in Ibadan, Oyo State Capital, who is now in dire need of job to compliment efforts of her husband, said as at now, she is into a petty trading, which she said, the earnings did not commensurate with the family needs

The mother of two, who profusely begged well-meaning people across the globe to help her secure a better job, added that, even if government job is not available, she can start a good business with N500, 00 if assisted

Penpushing reports that, Oluwakemi who uses walking stick to aide her movement, said what she did for now, is running an online business, adding that, she orders for such goods, which she in return sells to make ends meet

‘The online business am running now is not encouraging. I need good job, to compliment and support my husband, who is a loving husband, and doesn’t treat me shabbily because of my condition. I am presently on online trading, which is not that encouraging. I need white collar job, but if not available. I can as well start a good business with N500, 000. I am using this opportunity to appeal to well-meaning individuals and corporate bodies to support me’, she emphasized

Penpushing further reports that, Oluwakemi who can be reach on mobile phone numbers 07037166248 and 09040758870 for support, said rather than pity him over her physical challenge, encouraged well-meaning individual and private organisations to encourage her to attain better life 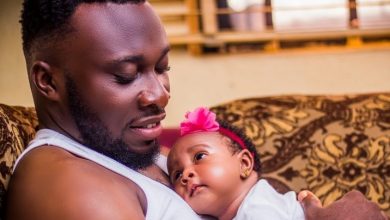 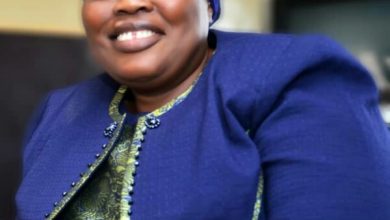 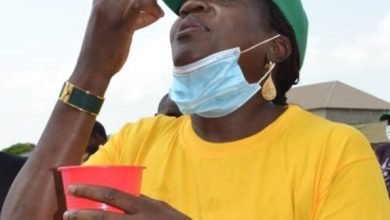