Penpushing reports, following the discovery of a text message Jamiu sent on September 19, 2021 to the woman, Opeyemi Adegbesan, which was uncovered by the husband, the development turned controversial.

The husband , Akintunde Adegbesan reported to the police of the alleged immoral act of Jamiu to his wife, and in a petition said Jamiu, was not only having affairs with his wife, alleged him of plotting to assassinate him.

Penpushing further reports that, on investigation, the police discovered that the alleged death threat was baseless, but established the amorous relationship between Jamiu and the woman, hence he was arrested 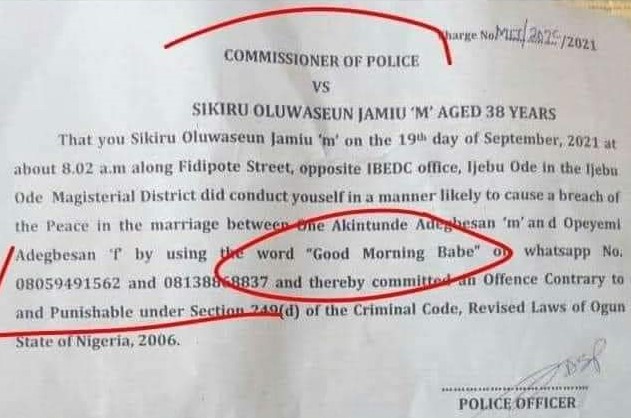 The suspect was subsequently  dragged before magistrate  court Ijebu-Ode on a one count charge of  misconduct in breaching peace in the marriage of the couple, by sending a text with the content,’ good morning babe’ on  a WhatsApp on19th September 2021.

Penpushing also reports that, the police ‘exhumed’ the amorous text message from telephone numbers 08059491562 and 08138868837 allegedly used by the duo of Jamiu and Opeyemi

The police in a charge sheet  to arraign the accused ,resident of Fidipote street of Ijebu-Ode, said  his conduct can cause a breach of peace in the marriage of the couple, stressing that Jamiu committed  an offence contrary to and punishable under section 249(d) of the criminal code

‘’That you Sikiru Oluwaseun Jamiu”m”on the 19th day of Septemtember, 2021 at about 8.02am along Fidipote street,opposite IBEDC office, in the  Ijebu-Ode Magiterial District did conduct yourself in a manner likely to cause a breach of peace in the marriage between one Akintunde Adegbesan ‘m’ and Opeyemi Adegbesan ‘f’ by using the word,’Good morning Babe’, on whatssap no 08059491562 and 08138868837, and thereby committed an offence contrary to and punishable under section 249(d) of the criminal code ,revised laws of Ogun State of Nigeria,2006, the charge reads 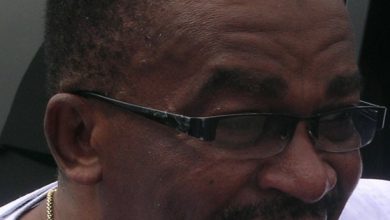