An early morning gas explosion in Baruwa community in Alimosho Local Government Area of Lagos State on Thursday rendered havoc, as number of buildings were burnt, while about five persons reported dead.

Penpushing reports that, the Acting Coordinator of the National Emergency Management Agency (NEMA),Ibrahim Frainloye said  the explosion was caused by the generator of the gas station which was on when the LPG tanker was discharging at the plant.

“At about 20 minutes to 6 a.m., at Candos Road, Baruwa Inside, Lagos, a LPG tanker was in the process of discharging at the Best Roof Plant Station and the Station Generator was on and from where it was reported that an explosion erupted’, he said.

“A source revealed that the Gas plant has about 30 metric tons of gas in the underground tank. While dispense to domestic consumption, it also loads LPG Tanks and it was stated that in the process of loading a tank with its generator working and possibly there could a leakage which got to the generator. The explosion threw the discharging tanker across the road. Many buildings have been destroyed’,Farinloye  said. 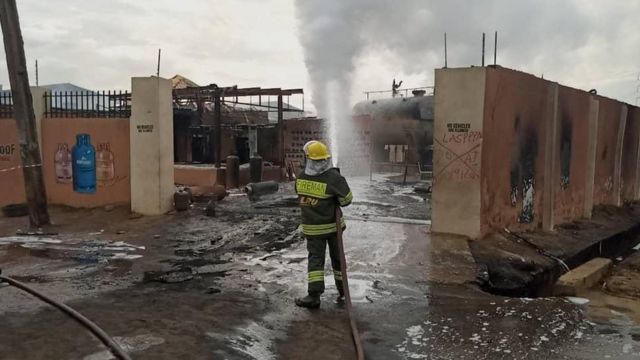 Penpushing further reports that, Lagos State Emergency Management Agency (LASEMA) confirmed that two bungalows, four storey buildings consisting of one school, one hotel, one creative centre, and one residential building were affected in the explosion.

The victims of the gas explosion majority of them who were traders with shops located close to the explosion site while speaking with journalists   lamented the damages the explosion caused them.

Penpushing also reports that, Taiwo Mojeed a resident of the house clos to the gas station,  while narrating the incident said  he discovered the gas leakage when he stepped out to use the toilet around 4 a.m.

“I looked around and saw that everywhere was filled with gas fumes. I ran back inside to raise alarm and call everybody to move out of the house because I didn’t know what could happen. We thank God that a lot of people were saved but I lost my mother to the fire. All of us standing here don’t have any clothes anymore but we thank God for our lives”, he said

Penpushing reports that a victim of the disaster Seyi Adeleke, who owns a shop where he rents out musical instruments, said he has lost over N2 million worth of goods and gadgets to the fire, adding his attention was brought to the incident early in the morning.

“Somebody called me early this morning that there has been a fire outbreak at Baruwa and that I should hurry over. My vehicle broke down on my way here last night so I passed the night at Toll Gate. If I had slept here, I probably would have died in the explosion too’, he stated.

“Apart from my personal loss, I had people’s instruments that were brought to me for repairs in the shop. About three churches have things with me that I was going to repair for them. I really don’t know where to start from right now,” he lamented.

Penpushing further reports that, in his own account , a treasurer of a cooperative society, Muhideen Oparinola, said he regretted the  late response of the fire service department, adding that  they could have salvaged a lot of properties if they had arrived earlier.

“Cooperative money has burnt with my shop. I withdrew the money yesterday and kept it in my shop so I could deliver at the meeting later today. The money was over N300, 000. Everything got burnt with my personal money’.

‘I almost got burnt to death too because I sleep in my shop. It was the spirit of God that woke me up early so I decided to go and call for prayer in the mosque. That was how I escaped the fire’, Oparinde said.

“When the alarm was raised, we all rushed here to see if we could contain the small fire that started then. We collected a bowl of detergent to use but then the thing exploded and everybody had to run for their lives. We have been calling the fire service since before 5 am. Maybe it would not have been this bad if they came earlier.”

Penpushing also reports that, another victim, who lost his new tricycle to the fire, Saheed Shamsideen  said he regretted bringing out the tricycle that morning, explaining that he did that to clean the tricycles.

“I wheeled out the “Keke” (tricycle) early this morning so I could clean it and get ready for the day’s work. I left it outside and went back in to rest a little bit more before starting the day. I was inside when I heard the explosion. Before I even thought about my “Keke”, I ran to save my life’.

“Right now, I don’t know where my wife and child are. Everybody had to run for his own life. I don’t even know where my phone is and her line is switched off. The person I got the Keke’ from is also on my neck. I got it on instalment recently for N1.2 million. I am supposed to pay N80, 000 monthly and I have not even paid the first month,” he said.

Penpushing reports that, Akande Abdulwaheed, a resident within the community was quoted saying that the best way to curb calamity like this is for the government to ban gas stations in residential areas.

“We don’t need to have gas stations in residential areas, especially a place as densely populated as this. It has been causing a lot of issues and loss of lives. One happened at Abule Egba sometimes ago, look at this one now’.

‘Where do we expect this to happen next? Some people are already getting ready to open another station down the street,  the government should help us to make sure that business doesn’t open here. They should be located away from residential places so that people can sleep peacefully in their houses,” he said.

The councilor representing the area, Gbenga Abimboye  in his own remarks pointed out the measures the community have taken to stop the operations of the gas station earlier,stressing that, “before this time, we have written a letter to the owner of the gas terminal here asking them why they would site such business here,”.

“We even copied the LCDA and told them to stop the gas terminal. They told us that they got approval from the federal government so there was nothing we could do about it. We had foreseen that something like this could happen. Some of our people are dead now and some of them are in the hospital receiving treatment,” he said. 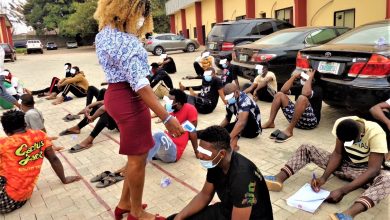