Penpushing reports that, the Command Public Relations Officer, Muyiwa Adejobi in a statement said the burglar had gained entrance into the room of one Mrs Adeyemi Opeyemi of number 2, Asalu Bus Stop, off Abaranje Road, Ikotun, Lagos in attempt to rob her.

The police spokesman explained that the victim raised alarm and the burglar escaped into the street, when some members of the community apprehended and beat him to death.

Penpushing further reports that, the community leaders arrested include Sakariyau Biliaminu,(66), John Adeyemi,(77) and Gabriel Ajayi(55), while the police declared that they all have some questions to answer pertaining to the killing of the suspect.

The Commissioner of Police, Lagos State, Hakeem, has condemned the act of jungle justice meted on the suspect and vowed to kick against such in the state as it is becoming rampant and such is inimical to collective efforts to improve on the Criminal Justice System of Lagos State.

The Command said as a follow-up to police investigation, other suspected receivers to the traffic robbers were arrested on 7th April, 2021, and disclosed their identities as include: Bello Jafaru,(20), Nuru Abdullahi,(23), Nafiu Saray(21) and Bashiru Mohammed(19,) all of Kasuwan-Dare Alaba Rago,  Ojo-Lagos.

Penpushing reports that, Adejobi said the suspects have confessed to the crime of attacking and dispossessing commuters and innocent Lagosians of their belongings along Ojo-Iba Road. 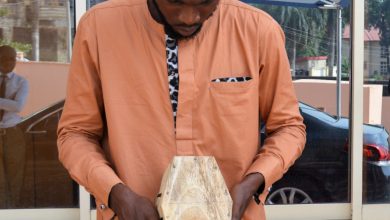