A British Broadcasting Corporation (BBC) journalist covering the suspended sit-at-home order at Cemetery Market, Aba, Abia State has been allegedly attacked on Wednesday by some policemen

Penpushing reports that, the journalist was said to be giving a live update during the British Broadcasting Corporation (BBC) Igbo Facebook broadcast, when the police operatives who were on routine patrol attacked him, accusing the journalist of filming them.

The heavily armed policemen were seen shouting on the reporter asking him to stop the recording while in response; he said the recording was a live coverage by the British Broadcasting Corporation (BBC) 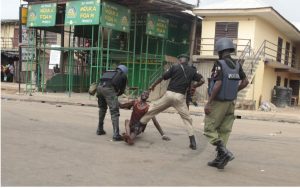 Penpushing further reports that, the policemen insinuated that, the reporter could be a spy pretending to be a journalist, and this was denied by the journalist, with a proof, but was manhandled by the officers and later arrested

Penpushing also reports that when contacted, the Abia State Police Command Public Relations Officer, Geoffrey Ogbonna, denied that the officers brutalised the journalist, but confirmed that the British Broadcasting (BBC) journalist was arrested, and later released.

“Somebody like that was arrested, but the issue of brutalisation, I don’t think there was anything like that. He was arrested and then introduced himself and he was allowed to go’ Ogbonna said.