The Lagos State Police Command has confirmed arrest of fifty suspected armed robbers and cultists Imota, Igbokuta, Adamo and Emure in Ikorodu area of the state,adding that it will always make the state hot for criminals

Penpushing reports that, the Command Public Relations Officer, Muyiwa Adejobi made this known, adding that the suspects were arrested during a sting operation carried out by the Commissioner’s of Police Strike Force between Friday 5th and Sunday 7th March, 2021.

The statement explained that, the Commissioner of Police, Hakeem Odumosu,  re-echoed the command’s readiness to tackle and decimate criminals in the state, as he gave detailed information of the arrested suspects

Penpushing further reports that, the command said they include:  Oladunni Abiodun,(20), Dosumu Oluwaseun, (22), Segun Adelaja(29), Gbamila Iyabo, (26), said to be wife of the number 1 of Aye Confraternity in Igbokuta, arrested with one pump action loaded with 8 rounds of cartridges. 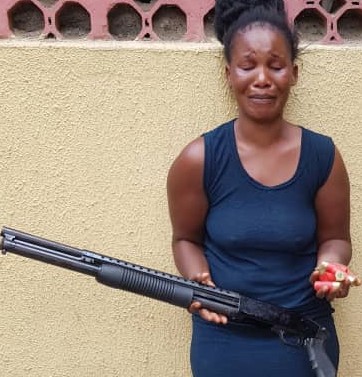 The statement said other are: Salisu Islamiyat,(29), wife of the number 1 of Aye Confraternity in Emure, arrested with a locally-made pistol with some live cartridges, Abiodun Abbey,popularly called Oju Ogunle, alleged to have killed more than twenty two  people in Ikorodu area, and 44 others.

Penpushing also reports that Adejobi said other items recovered from them include guns, live ammunition and cartridges, assorted charms, berets with confraternity logos, paraphernalia of office of confraternity and some dangerous weapons.

The Commissioner equally confirmed the arrest of the six  suspected cultists at Ibeju-Lekki area of the state by the operatives attached to Elemoro Division in compliance with his directive  on constant raids of the criminals hideouts in Eti Osa Local Government Area of the state.

The statement added that the Commissioner has put all Area Commanders and Divisional Police Officers in the state on their toes to ensure that the state is rid of cultism, crimes and criminality, and charged them to spread and embrace the principles of the Community Policing concept of the Inspector-General of Police, to have effective policing of their respective areas and the state at large

Meanwhile, the police boss has ordered for prompt investigation and prosecution of the cases as necessary arrangements have been made by the Lagos State Government to consistently fast track judicial processes in the state.