Penpushing reports that, the Global Support for Kids, under the supervision of Child Protection Network,(CPN), the umbrella body of Non-Governmental Organisations responsible for the welfare of children was led by the founder to hand over the equipment to the station leadership.

The  office equipment donated at the brief presentation include  tables, chairs and standing fan, which were received by the Divisional Police Officer of the station  Muraina Ayilara, a Chief Superintendent of Police in company of some top officers of the station.

Penpushing further reports that, the Executive Director of Global Support for Kids, Opeyemi Olowookere gave reasons for considering the station, adding that this was as a result of the station’s support for the welfare of the abused and street children in reforming them, as initiated by the organisation. 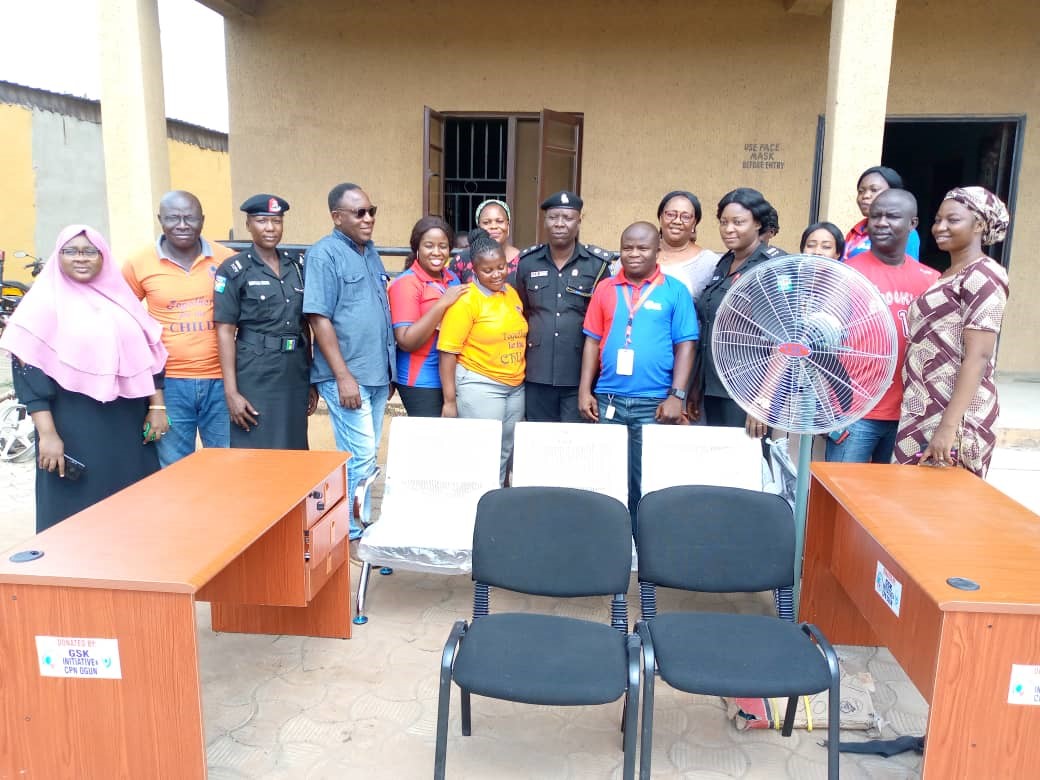 “It becomes necessary to do it because this work we can’t do it ourselves. When we paid courtesy visit last week, we made a pledge to make their office a befitting one by equiping it with office equipments. Not that they cannot afford it, but it is part of our organization little contributions’, he said.

“Because we will need their support in the line of our jobs in the area, so we have to support them too. We will be going to the field on Tuesday, Wednesday and Thursday at the railway area, so their support will be highly solicited as well. Because this is our problem and we have to face it together,” he stressed.

Penpushing also reports that, the Ogun State Coordinator, Child Protection Network (CPN), Alfred Akingbade Soleye in his remarks pointed out that it became necessary to support the station, as a result of the harmonious relationships between the two bodies.

The coordinator, noted that the immense support the organisation received from the police necessitated  the gestures as a way of appreciation and that such would ginger them to do more for the society.

“As the Ogun State Coordinator of Child Protection Network (CPN), CPN is a coalition of Non-Governmental Organisations (NGOs) in Ogun State. The NGOs that are working with children and we want the people to see thatwe  are of the truth, the Civil Society Organizations and police must work in synergy’.

“We have been having programmes in Lafenwa, most recently, we had one, and the police actually supported us and we realised that we also needed to make their job easy, this is the reason we decided to come with this little token’.

“At least for us to work in synergy for us to achieve our targets and that is to rescue the children that are in the street, that’s the primary reason while we have done this.”

Penpushing reports that, the Divisional Police Officer  in his remarks expressed appreciation to the organization, adding that the gestures gladdens his heart and that of his men and officers at the station.

“It gladdens my heart for such NGOs, the GSK and CPN to come to our need in terms of these office equipments like tables, chairs and fan to equip Juvenile Welfare Centre (JWC) in Abeokuta’.

“It is a welcome idea and we appreciate it. God will bless them. It is a challenge for us and it will make us to work harder. It serves as motivation to do our jobs, to support children and at any point in time, they need our help’,Ayilara states.

“We will surely work and form synergy with them and ensure that street children are protected and their rights. We will equally call on them whenever we see street children that are wayward, so that they can come for their rescue and see to their welfare. We have been collaborating with them and it will continue.”

Penpushing also reports that, the Division Officer in Charge of Juveline Welfare Centre, Mrs Bosede Ajamolaya, Assistant Superintendent of Police expressed appreciation to the organization for deeming it fit for the donations

“I don’t even know what to say because it gladdens my heart and I really appreciate them and pray that God Almighty will bless them abundantly, and give them the strength to carry out what they have in mind to do for the children which I know God has answered their prayers’, she said.

“The way I see then and the way I can describe them, I believe it is Almighty God that sent them to these children. Ever since I joined the force, I have never met such group, but this is the first time, I know that they are God sent. God will help them to fulfil their desires”,Ajamolaya said