Gunmen attacked the Kaduna Airport on Saturday and allegedly killed an official of the Nigerian Airspace Management Agency (NAMA), who is a guard, identified as Shehu Na’Allah, at the runway.

Penpushing reports that, the Manager of the Airport, Amina Salami, who confirmed the sad incident, explained that the bandits invaded the airport through the perimeter fence from a nearby forest at about 1 p.m.

The Manager added that the deceased, was patrolling the runway when he was shot by the assailants, adding that soldiers at the airport, however, responded immediately and repelled the attack “The sound of gunshots attracted the attention of armed security operatives who arrived the scene, and were able to repel the bandits form gaining access into the main airport complex,” she added.

Penpushing further reports that, airport sources, however, disclosed that, the attack delayed the takeoff of a scheduled Lagos-bound aircraft, while as at the time of filing this report, armed operatives of the Nigerian Airforce and other military personnel took over the inner and outer areas of the airport to fish out the bandits. 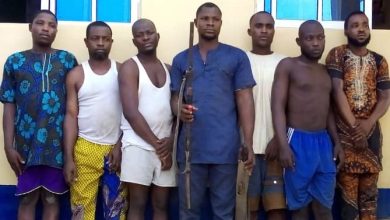