The Iyalode of Yorubaland, Iyalode Alaba Lawson has recorded another feat, as she was conferred with another foremost chieftaincy title of Yeye Oba of Ilaro, Yewaland of Ogun State.

Penpushing reports that, the Olu of Ilaro and Paramount Ruler of Yewaland, Oba Kehinde Olugbenle conferred the prestigious title on Lawson in view of her track records of positive contributions to women folks, state, Nigeria and the world at large. 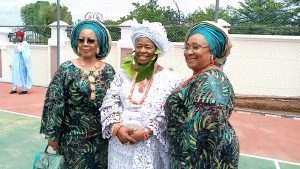 The Yeye Oba was on Saturday  7th of May,2022, gloriously and royally welcomed to the palace of the first class traditional ruler in Ilaro, headquarters of Yewaland with pomp and pagentary followed with thunderous ovation from guests and hundreds of indigenes who came to grace the occasion.
Penpushing further reports that, the conferment was part of activities marking the  10th anniversary of the royal father on the throne of his forefathers, a ceremony which was the talk of the town, as other individuals were also honoured by the monarch on merits. 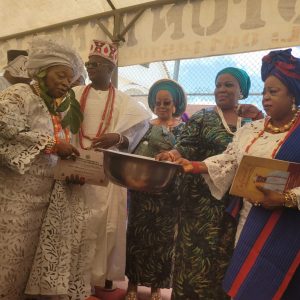 The Yeye Oba in white lace attire with headgear to match was accompanied to the ceremony by Olori Yetunde Tejuoso, Olori Bisi Tejuoso, Prince Lanre Tejuoso, Prince Dimeji Kayode-Adedeji(founder penpushing media),Princess Omotola Omole Chief(Mrs) Sade Kokumo(wife of Deputy Inspector General of Police),Taiye Jiboku(Elder brother of Iyalode of Yorubaland),traditional ruler of Iro town, Oba Najeemdeen Alani Aromaye, Oba Moroof Adebayo, Onitaafin of Orile Taafin and Egba Christian Chiefs among others
Penpushing also reports that, the royal father while installing Lawson as Yeye Oba said she was considered on merit, as a woman of substance, who is capable, efficient and reliable for the task of her new position in the palace and traditional council of the ancient town. 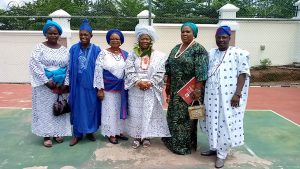 The royal father prayed for longetivity for the new Yeye Oba, expressing optimism that her installation and  roles will add values to Ilaro town and Yewaland in general, with assurance that she would enjoy adequate support from the entire indigenes and the traditional council.
Penpushing reports that Lawson who was beaming with smiles throughout the events was at the colourful events blessed  with “Ewe Akoko” on her head,as performed by the traditional ruler, who thereafter  handed the certificate of her new traditional office, while the ceremony was followed with reception held at palatial conference room of the monarch. 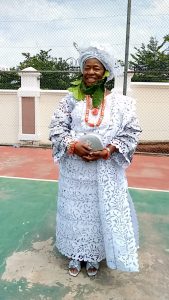 The Yeye Oba in her response appreciated the monarch and the entire township on the honour bestowed on her, with a pledge that she would contribute her quota to the positive development of the traditional council and the Yewaland.
“I want to appreciate Kabiyesi Alayeluwa, Oba Kehinde Gbadewole Olugbele, Olu Ilaro and Paramount Ruler of Yewaland for the honour accorded to me. I wish Kabiyesi a continued reign of peace, progress and prosperity” Lawson stated
“I also thank the Olu Ilaro in council and other chiefs,dignitaries, associate, friends, media, guests and all well wishers who have helped in one way or the other to make this event a befitting success. I pray that your homes will never be short of good things to celebrate. 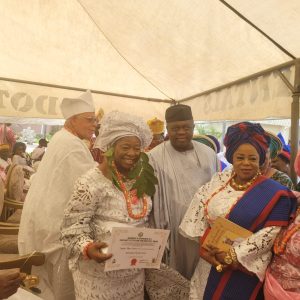 Penpushing further reports that, Lawson was born on January 18, 1951, had her primary education at St James  African Primary School, Idi-Ape, Abeokuta between 1957-1962, and from there she proceeded to Abeokuta Girls Grammar School, where she obtained the West African School Certificate 1963-1967.
The Yeye Oba started her teaching career in 1969 and later left for St Nicholas Montessori Teachers Training College at Prince’s Gate England in 1973 for further studies where she obtained a 1st class Diploma in Education with distinction.
Penpushing also reports that, Lawson who is a proprietress of Lawson Group of Schools is the first female National President of Nigerian Association of Chambers of Commerce, Industry, Mines and Agriculture (NACCIMA), 1st Female President, Federation of West African Chambers of Commerce and Industry (FEWAC) and immediate past Chairman, Board of Governing Council, Moshood Abiola Polytechnic (MAPOLY), Abeokuta.
The Yeye Oba is also the 4th Iyalode of Egbaland, conferred on her by His Royal Majesty, late Oba Oyebade Lipede, Alake and Paramount Ruler  of Egbaland, and the first Iyalode of Yorubaland, conferred on her by  Iku Baba Yeye, His Royal Majesty, late Oba Lamidi Adeyemi, Alaafin of Oyo and Amazon of Yorubaland, an award bestowed on her by Ooni of Ife, Oba Adeyeye Ogunwusi 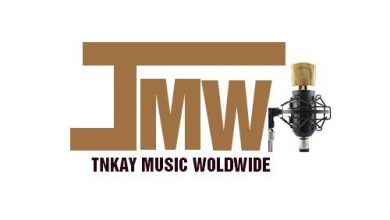 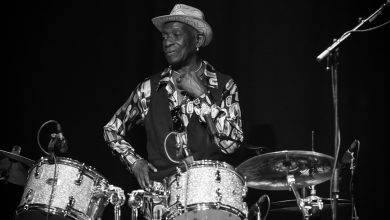