The South-West Presidential aspirants under the platform of  the ruling All Progressives Congress (APC) and their political leaders have declared that the next President must come from the region.

Penpushing reports that, the resolution was reached Friday at a meeting held with presidential aspirants from the zones in Lagos, chaired by Chief Olusegun Osoba (former Governor of Ogun State)and Chief Bisi Akande(former Governor of Osun State) both leaders of the party 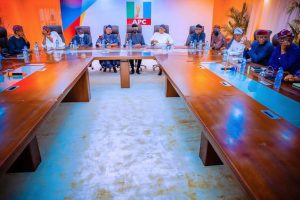 The aspirants in attendance include the Vice President Prof Yemi Osinbajo; Bola Tinubu, former Lagos Governor and national leader of the party, Governor Kayode Fayemi of Ekiti State; and Senator Ibikunle Amosun, who was former Governor of Ogun State.

Penpushing further reports that others in attendance  at the meeting were Speaker of House of Representatives Rt Hon Femi Gbajabiamila, Babatunde Fashola, Minister of Works and Housing; and Ogbeni Rauf Aregbesola, former Osun State Governor.

The spokesperson for Governor Babajide Sanwo-Olu, who hosted the meeting, Gboyega Akosile explained that the meeting ended with a one-point resolution, that is to make sure that the region is united on purpose, that the next president of Nigeria must come from the South West. 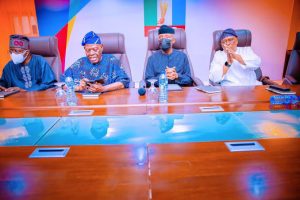 Penpushing also reports that, one of the convener of the meeting and one time national chairman of All Progressives Congress(APC) Chief Bisi Akande shortly after the meeting,briefed journalists about the resolution, but kept mute to entertain further questions from journalists.