The General Overseer of Victory Life Bible Church (VLBC) Apostle Lawrence Achudume has declared that any proposed plan for Muslim-Muslim ticket by any political party in Nigeria in the forthcoming 2023 presidential election will not see the light of the day.

Penpushing reports that, the clergyman made this known while featuring as guest during exclusive interview with Penpushing online Television held in Abeokuta, Ogun State Capital, warning that such move will further polarized the country.

The known frankly speaking Achudume explained that the era of Muslim-Muslim ticket acceptance during late Moshood Abiola and Babagana Kingibe as his runningmate was possible when the country was united, unlike the present situation which is contrary to that period.

Penpushing further reports that, the cleric emphasized that, with the present situation in the country,he emphasized that even if there a proposal for Christian-Christian ticket,or Muslim-Muslim ticket, it is not visible to work out

‘Coming to Muslim-Muslim or Christian-Christain ticket. None of them is right. I won’t support both. We are a nation where religion has played so many major roles in our national divide and  anybody to advocate a Muslim-Muslim ticket  today Nigeria would be an act of impudence, an act that lacked moral decency as a nation’, he emphasised.

‘People suspects everything Buhari does as a Muslim president. If it is a Muslim-Muslim ticket, most people would have felt Nigeria is sold. The Christian will conclude Nigeria is sold. That the plan to Islamise Nigeria will now be concluded because there would not be anybody else to give them contrary opinion’, he explained.

Penpushing also reports that, he pointed out that, no Christian will support Muslim-Muslim ticket in Nigeria of today, stressing that  such arrangement doesn’t make sense and not an ideal anybody should think of

‘So, no Christian will support any Muslim-Muslim ticket in Nigeria of today and I can tell you, even people like me will hit the street to campaign against it. It doesn’t make sense, it’s not an idea anybody should mute in today’s Nigeria’, he emphaised.

‘In 1993, when MKO Abiola and Kingibe did that one, look at the polity. It wasn’t like what we have today. Nigerians were more united, today, we are more divided. You have the IPOB, MASSOB, Igboho is there in Yorubaland, and different groups in the North’, he said.

‘So, how would you now bring a Muslim-Muslim ticket and you expect a southerners, a South East to accept it. South East have been contemplating to have a taste of the presidency for years, they never had it. Does it mean there is no Christian in the North that can become Vice President? Don’t say it again!’, he warned

‘Not even when some governors are not even cultured in their language. They speak with such height of arrogance and impunity. And one thing they forget is that being a governor, senator or President doesn’t make you better than others’, Achudume said. 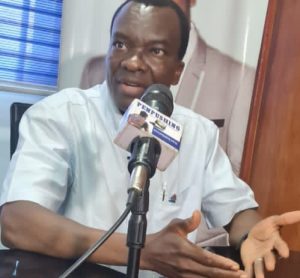 ‘Infact, it should be the least within the nation. It should be a servant of all, not to lord it over all but to distribute our common wealth that everybody will rejoice. But we have a nation where when we put in leadership, they become lord, which is wrong’.

‘That you are Governor, Senator, Speaker should humble you. It shouldn’t make you arrogant. But what we see in Nigeria, when they get there they become so arrogant and uncontrollable, they look down on everyone. People like us will resist it’,Achudume said

Meanwhile, watchout for the full 50 minutes exclusive interview on our online Television, website and Youtube in due course, where the fearless Pastor bears his mind on various national issues, which cut across all aspects. We shall keep you posted