The Ogun State Police Command, on Tuesday paraded six suspected armed robbers operating in military camouflage, along the Sagamu-Benin Expressway, and also announced the arrest of herdsmen who allegedly attacked a family and raped their 16 year old daughter.

Penpushing reports that, the Commissioner, Edward Ajogun  explained that the command received a distress call informing them about a gang of armed robbers who were dressed in military camouflage along  the Sagamu-Benin expressway at Ijebu-Ife, and also dispossessing motorist and commuters of their valuables.

‘Upon getting the information, a team of Special Anti-Robbery Squad (SARS) was asked to join forces with the patrol team of Ijebu-Ife division and confront the dare devil men, and on sighting the policemen, the hoodlums engaged them in a gun battle which lasted for about 30 minutes, at the end of which one of the hoodlums was shot dead while others escaped with gun-shot injuries’. 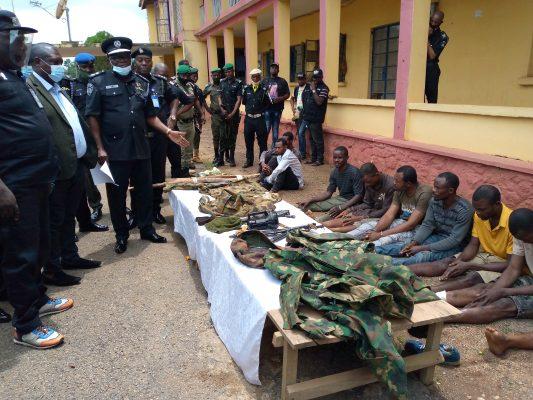 Penpushing further  reports that among the suspects arrested on the 4th September, 2020 at about 2:30am were; Vincent Magnus, Elias John, Ikechukwu Alore, Ifeanyi Emmanuel, Chibueze Kingsley and Chigozie Michael.

Penpushing   reports that also paraded were two herdsmen who attacked a family in Afowowa village while grazing their cattle, and they were also alleged of robbing the family cash sum of N140, 000, and raped 16 year old daughter of the family.

The Commissioner while parading the suspects at the State Police Command Headquarters, Abeokuta, said that the command has ensured that means of fighting crime and quick response to distress call do not give criminals any breathing space across the length and breadth of the gateway state.

Penpushing also reports that, he, added that it is the resolve of the Command to take battle  to the doorstep of criminals, stressing  that the effort is yielding positive results part.

“This is a strong signal to all would be criminals that Ogun state is not going to be comfortable for them. We are more determined and resolute than ever before to give hoodlums, miscreants and those who are not ready to tow the line of peace’, he said.

“The law abiding citizens of the state should be rest assured that their security is guaranteed all the time and they should always trust and have confidence in the ability of the command to attend to their security needs at all times” Ajogun stated.