There was a mild drama on Thursday as a legal practitioner, Barrister Malcom Omirhobo, appeared at the Supreme Court in Abuja, Federal Capital Territory (FCT) in traditional worshippers to attend proceedings

Penpushing reports that the   human rights lawyer, stunned the court on arrival, having put on his black gown over a white inner shirt with a gourd and cowries dangling on his chest, as well  white chalk-drawn around his right eye. 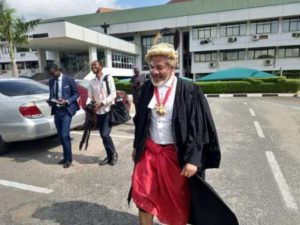 Penpushing further reports that, who causes amazement explained that he was motivated to appear in court in the unusual attire by last week’s judgement of the Supreme Court affirming the rights of Muslim female pupils to attend school in hijab in Lagos state schools.

The lawyer who described himself as a traditionalist, declared that he will henceforth appear in court in the traditional worshipper’s attire in all his subsequent court appearances, arguing that if the school pupils can wear hijab, the mode of their worship, to school, any attempts to stop him to appear in his faith’s attire would amount to a violation of his fundamental right. .

“I have been missing all along until the Supreme Court gave the judgment on Friday. I interpreted the judgement as a decision that guarantees our rights under Section 38 of the constitution. I felt confident to appear at the Supreme Court in my religious attire of worship and any attempt to stop me from dressing like this will be a violation of my right, freedom of thought, conscience and religion,” he added.

Penpushing also reports that, Omirhobo, said he attended court as an amicus curia“a friend of the court” and to observe proceedings, adding that he had a nice time and that the Justices of the Supreme Court was pleased with his outfit

“I had a nice time in court before my lords. I went there and sat before my lords, and they were pleased with my appearance until they have to reconstitute’, the human rights legal practitioner emphaised.

Penpushing reports that, Omirhobo expressed appreciation to the Supreme Court and encouraged the police, those in the Army, the Navy, Doctors and others to also dress in their mode of religion in their places of work, adding that he would equally ensure his children also dress to court in the same way. 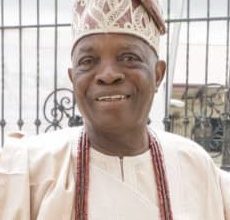 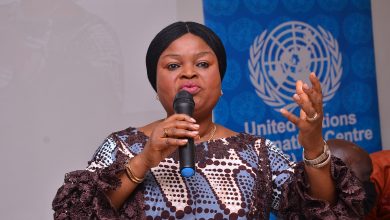