The Ogun State Police Command has arrested three suspected hackers, for alleged access to bank account of Kolawole Sobande and siphoned the sum of N300, 000

Penpushing reports that, the Command Public Relations Officer, Abimbola Oyyemi said in a statement that, the three suspects include: Adebayo Oluwatosin(23),Obinna Abiogbe(27) and Segun Adefunmi.

‘They were on the 18th of May 2020 arrested by operatives of Ogun State Police Command for hacking into the bank account of one Kolawole Sobande and siphoned the sum of N300,000 there in’, he said.

Penpushing further reports that, Oyeyemi said the arrest of the suspects followed an information received from a P.O.S operator who alerted the police that one of the suspects approached him to transfer the sum of N100,000 from an account to his own (POS operator’s) account and handed it over to him.

The command stated that, when Pos operator  demanded for his(suspect) identity card, he discovered that it bears different name to the one on the bank account.

‘Upon the information, the DPO Sango division, Csp Godwin Idehia detailed his detectives to the scene where the suspects were arrested. The account owner was contacted and he confirmed that the sum of N300,000 has been removed from his account’.

‘On interrogation, the suspects confessed been an internet fraudster who specialized in hacking into people’s bank account and siphon their money’, he said.

Meanwhile, the Commissioner of Police  Kenneth Ebrimson has ordered a full scale investigation into the past activities of the suspects with the view to arraign them before a court of competence jurisdiction. 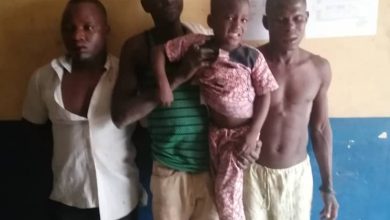