Facebook Twitter LinkedIn Pinterest WhatsApp Telegram Share via Email
The Nigeria Police Force has disassociated itself from the  protest of constabularies over alleged non-payment of 18 months salaries, explaining that the protesters are not on the payroll of the authorities.
Penpushing reports that, Force Public Relations Officer, Muyiwa Adejobi made the clarification in a statement, explaining that the protesters are on voluntary service in line with the community policing constabulary scheme of the force, stressing that actions of the said constabularies was nothing but mischief
“The Nigeria Police due to the imperativeness of addressing and clarifying issues surrounding the recent protest of Community Policing Constables in Ilorin, Kwara State, wishes to state unequivocally that the Community Policing Constabulary Scheme of the Force is a purely voluntary service commenced by the Federal Government to train and incorporate individuals with prior paid employment who desire to spend their spare time assisting the police in its simple police tasks within their various communities”, Adejobi emphasized. 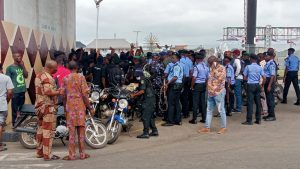 “It therefore came as a rude shock that members of the scheme were protesting non-payment of salaries in Kwara State recently when the ultimate purpose and rule of engagement of the scheme is to promote community partnership in crime control via the presence of respected members of the public, with a source of livelihood, partnering with the Force under the scheme to render voluntary service for better and improved policing within their communities”, the statement said
“The scheme clearly delineates the roles of the Community Policing Constables, who are not direct employees/personnel of the Police but of their respective communities, at both divisional and state levels to include assisting the police in crime detection and prevention, conflict resolution, intelligence gathering and dissemination to local Police Commanders, maintenance of law and order, deployment to complement conventional police officers in patrolling their communal public space, advising the public on safety, crime prevention, and security tips, dealing with minor offences and social vices, working with relevant stakeholders on crime control, and traffic management and school safety duties”, Adejobi wrote. 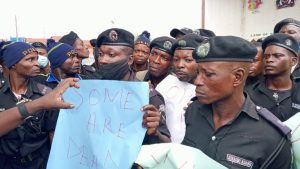 “The Nigeria Police therefore re-emphasizes the fact that the scheme is voluntary and no payments were agreed with the individuals under the scheme neither were paid terms of appointment discussed prior to its commencement. Subsequently, considering the fact that a protest for payment when there is no basis for such is mischievous and ill-conceived; the Force however, will be taking adequate measures to review the effectiveness of the scheme as soon as possible”, Adejobi emphasized.
FOOTNOTE: You want to share story with us? You want to advertise with us? You need publicity for product, or service, or   event? Contact us on WhatsApp +2348073463653 or email [email protected]

Traditional ruler frowns at criminal activities in his domain 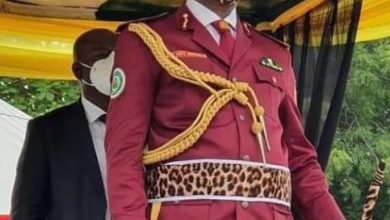