The Lagos State Police Command has arrested two suspected drug peddlers at Dantata area, Mile 2, along Badagry Expressway, Lagos State and recovered weeds suspected to be Indian hemp and other illicit substances from them.

Penpushing reports that, the Command Public Relations Officer, Muyiwa Adejobi made this known in a statement, adding that the suspects were arrested following a tip off over their illegal activities

‘The police had been intimated of the activities of the drug peddlers who were displaying drugs for sales with impunity around the area. The policemen, as a follow up to the tip off, raced to the scene where one Rabiu Mohammed, m, was arrested’. said.

Penpushing further reports that, Adejobi said the suspect confessed that one Sanni Audu, was the major dealer/supplier, adding that  police went after Sanni Audu and arrested him w\ith some qualities of weeds suspected to be Indian hemp and illicit substances. 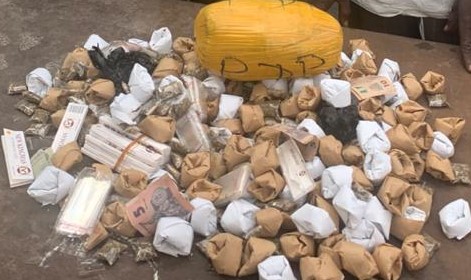 The statement said, the Commissioner of Police, Hakeem Odumosu, has equally directed that the suspects be transferred to the State Criminal Investigation Department Panti, Yaba, for proper investigation and possible prosecution.

Penpushing reports that, the police boss while reiterating his directive to officers and men of the command to go after criminals and hoodlums in the state, ordered that other members of the syndicate must be apprehended.

The commissioner further directed that the illegal items/illicit substances in the custody of the suspects and in any part of the state must be recovered in order to reduce the quantity of hard/illicit drugs in circulation.

Penpushing further reports that, Odumosu therefore reassured the general public of adequate security of lives and property and sustainable fight against the menace of drug misuse and abuse in the State.\