The Ijesaland Development Foundation (IDF) has concluded arrangements for a colloquium by zoom   which will focus solely on the industrialisation and development of Ijesaland, located in Osun State.

Penpushing reports that, the President of the Foundation, Engr Dideolu Falobi made this known in a statement adding that the webinar to involved sons and daughters of Ijesaland both home and in Diaspora is scheduled to hold on September 27, 2020 at 5pm.

Penpushing further reports that, the statement said the foundation called on participants to register for the meeting via https://us02web.zoom.us/meeting/register/tZArcu-oqj0uH9fVsVVxn11871dIsAtyZsLi , adding that after  registering, they  will receive a confirmation email containing information about joining the meeting.

The Ijesaland Development Foundation was incorporated in 2014 by a group of concerned Ijesas as veritable vehicle for facilitating the development of Ijesaland, while one of her core objectives is the promotion of the industrialisation of the land in the hope that the multiplier effects will impact positively on all sectors inclusive of, but not limited to Agriculture, Transfer of Technology, Education, Trade, Commerce, Business Tourism, and Corporate Social Responsibility Projects.

Penpushing also reports that, an Economic Summit was held in November 2014 at the IBIS Hotel, Ikeja, Lagos where a strong case was made for all Ijesas to return home and develop their motherland.

The record has it that, since then, a lot has happened but a lot still needs to be done, hence decision to go back to the drawing board and hold a colloquium by ZOOM at which it will focus solely on the industrialisation of Ijesaland.

‘This colloquium will include a call to action where various investment groups will be initiated with each group focused on the establishment of a particular medium and large scale industry’, Falobi , the Bobajiro of Ilesa stated.

The Foundation boss explained that, membership of each group will be voluntary while their management will be done exclusively by those that subscribe to each group,adding that the foundation will be an independent facilitator whose core duty will be to support each group in their efforts to translate intent to action.

‘Ultimately, it is our sincere hope that at least five Medium and Large Scale Industries will commence activities in Ijesaland within 6 to 12 months of this Colloquium. So help us God’,Falobi who is the Bobajiro of Ilesa  emphasised.

Penpushing further reports that, the statement encouraged Ijesas to show interest in  in participating in the colloquium by sending their names, WhatsApp number and e-mail address to *08036244004 OR +2348060016864 or [email protected], assuring that the zoom link will be forwarded to them on receipt of these details. 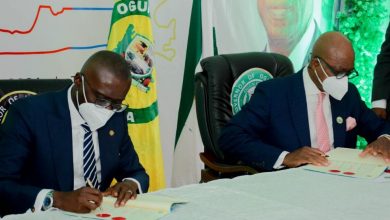