Facebook Twitter LinkedIn Pinterest WhatsApp Telegram Share via Email
A female suspect, Opeyemi Ibikunle who was arrested by the Ogun State Police Command for her alleged involvement in the kidnap of a pastor has disclosed that, she masterminded the operation to teach the cleric a lesson of not to be too greedy when it comes to business transaction.
Penpushing further reports that the suspect said the cleric who was her business partner cheated her, hence she contacted two men to carry out the operation of kidnapping him
The Ogun State Police Command Public Relations Officer Abimbola Oyeyemi, who confirmed the development, disclosed that, the lady and one  of her accomplices were later arrested while the third suspect as at the time of filling this report was still on the run, but assured that he would be arrested  in due course 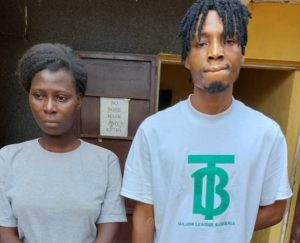 “Men of Ogun state Police Command on the early hour of Thursday 14th of July 2022, arrested two persons in connection with the forceful abduction of one Pastor Mapai Samuel of ZOE family international church, located at Odo eran area of Abeokuta”, the statement said
Penpushing also reports that the suspects, Ibikunle Opeyemi ‘ and Kadiri Jamiu  were arrested following a distress call received by policemen at Aregbe divisional headquarters, that two men who dressed in military camouflage accompanied by a woman invaded the church.
The statement said  while the pastor was preaching at about 8 pm, and forcefully dragged the pastor out of the church and took him away to unknown destination adding that, not quite long after taken the pastor away, the invaders called to demand for certain amount of money as ransom.
“Upon the distress call, the DPO Aregbe division, CSP Ikechukwu Gabriel and his detectives quickly embarked on technical and intelligence based investigation and discovered that the suspects were hiding somewhere around Adigbe area of Abeokuta”, the statement said
“The DPO and his men in conjunction with men of Adigbe division stormed the hideout where the Pastor was rescued and two of the suspects were arrested, while
the two men in military camouflage escaped”, Oyeyemi stated .
“On interrogation, the woman amongst them claimed to have been in business relationship with the pastor, and that the Pastor cheated her in the course of the business which made her to contact the three men to kidnap the Pastor in order to teach him lesson”, he said
Penpushing also reports the Commissioner of Police, Lanre Bankole, who praised his men for their quick response to the distress call, has ordered the immediate transfer of the suspects to anti kidnapping unit of the state criminal investigation department for discreet investigation 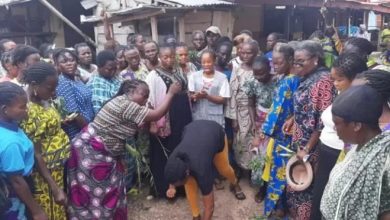