The Ogun State Governor, Prince Dapo Abiodun, on Friday, officially flagged off women empowerment scheme with disbursement of individual livelihood grants to 2,094 women across the state.

Penpushing reports that, Abiodun , who performed the flag-off ceremony at the relaunching of Oko’wo Dapo scheme in collaboration with Nigeria For Women Project (NFWP) at the Moshood Abiola International Stadium, Abeokuta said women empowerment and emancipation would continue to be at the front burner of his administration.

The Governor noted that in the economic architecture of his government, the womenfolk form a vital economic bloc, hence, the emplacement of various schemes to empower them, not only financially but economically.

Penpushing further reports that, he said out of estimated 7,535,007  2021 population projection by the Nigerian Bureau of Statistics (NBS), for Ogun State, females are put at 3,788,932, which is 50.28%, saying  the significant number of women cannot be overlooked, if the state truly desires sustainable development. 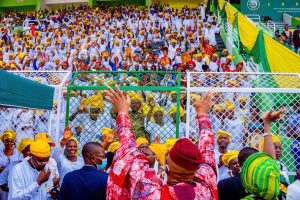 The Governor , who added that his administration had observed women as mostly involved in Micro, Small and Medium Enterprises (MSMEs) but always find difficult to access financial resources for the growth of their businesses from conventional financial institutions, said his government had since devised other approaches to empower the womenfolk.

Penpushing also reports that, Abiodun pointed out that  these, include capacity building of 500 female entrepreneurs across the state to enable them access financing and scale up their businesses; empowerment of 2,500 rural women across the state through provision of products worth ₦100million; empowerment of over 600 youths through vocational training while 400 women and youths are still undergoing training at the vocation training centre under the Ministry of Women Affairs and Social Development; empowerment of 95 Women across the three Senatorial districts and more than 100 widows were also empowered during the commemoration of year 2021 International Widows Day.

The Governor  emphasised that the empowerment programmes are targeted at alleviating poverty and increasing prosperity of women, stressing that, women womenfolk are integral part of our financial inclusiveness agenda.

“Our womenfolk are integral part of our financial inclusiveness agenda. We are committed to providing avenues for our women to gain power and control over their own lives and acquire requisite skills and technical know-how to make strategic choices’, he stated.

‘It is a critical aspect of achieving the United Nations’ Sustainable Development (SDG) Goal 5 – Gender Equality. On its own, Gender Equality provides more socioeconomic and political wherewithal for our women’, Abiodun added. 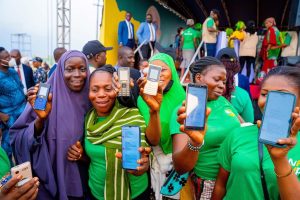 “At the macro level, it will go a long way in reducing poverty in the family; reduce gender-based violence and abuse in the society; and, further strengthen the economy. Therefore, empowering our women is not a favour to their gender, it is, in fact, one of the most viable approaches towards achieving sustainable economic development”, he said.

Penpushing reports that, Abiodun while commending the Federal Government  for the initiative of the Nigeria for Women Projects (NFWP), the Federal Ministry of Women Affairs and Social Development and the World Bank, said the choice of Ogun state as one of the six states in each of the six geo-political zones of Nigeria for the implementation of the Nigeria For Women Project (NFWP)  programme is commendable. 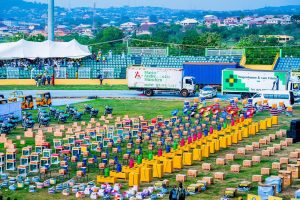 The Governor expressed optimism that the Nigeria For Women Project (NFWP)  programme would be extended to other local government areas in Ogun, saying the Federal Government scheme is in tandem with Oko’wo Dapo Scheme.

Penpushing further reports that, Abiodun stated that after disbursing the individual grants to women beneficiaries across the three implementing Local Government Areas of Odeda; Ijebu North-East; and, Yewa North, his administration would soon re-launch Oko’wo Dapo scheme in the remaining 17 local government areas of the state.

The Governor, however, disclosed that some of the beneficiaries of the first phase of Oko’wo Dapo in Odeda local government were at an advanced stage of floating a micro finance bank, which according to him, would further provide for financial inclusiveness for more people and easier access to financial resources to boost their enterprises. 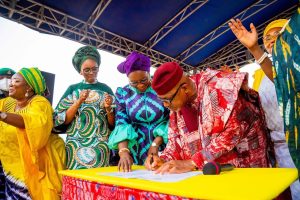 Penpushing also reports that, while saying the disbursement would be in phases, he enjoined the beneficiaries not to see the financial assistance as their own share of the national cake, but see it as an avenue for economic empowerment through which they will be gainfully employed, improve their productivity and increase  income-earning capacities, and, expectedly become net employers of labour”.

“We see the sustainability of this programme as a bilateral responsibility. Government has played its own part by providing the funding, beneficiaries should reciprocate by ensuring that they utilize the funds for the intended purposes, so that it will bring the desired results. Fidelity to this public trust will encourage other Development Partners to collaborate with us on this venture’, he added.

“Let me also use this opportunity to call on well-meaning individuals and corporate bodies to come and partner with us and join us in this journey to take Ogun State to a greater and more prosperous heights”, Abiodun submitted.

Penpushing reports that, the event had the Chief of Staff to the President, Prof. Ibrahim Gambari; Minister of Women Affairs and Social Development; Mrs. Pauline Tallen, wives of the Kwara and Osun State governors, the World Bank Country Director, Mr. Shubham Chaudhuri, among other dignitaries in attendance. 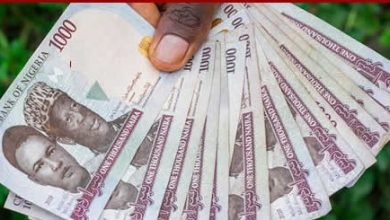